We were going to skip Thailand altogether until I discovered the flower festival in Chiang Mai. Then we organized the elephant adventure and a phenomenal cooking class and Chiang Mai became a greatly looked forward to destination. Then, of course we had to get there from Cambodia. It got extremely complicated which brought us to Bangkok for 2 days which we had never intended. But I digress…

The flower festival was a widely touted event on the internet yet locally no one knew where or when it was. Our hotel manager thought south west gate but otherwise was clueless about the event. No one could tell us where the parade was. Google describes the parade route, “Nawarat bridge to Thapae road, Kotchasarn Road, Changlor Road and then to Arak Road“. Steve and I have been struggling with the map and points of direction for 3 days already and considering most roads are signless we gave up and thought we’d follow the crowd. But there was no throng or flow of flower enthusiasts. My intention strong yet accepting, we went for the Nong Buak Haad public park at Pratu Suang Prong. At the canal we were greeted by a huge orchid exhibit lining the length of the street. Steve is captured.

We see the park entrance. We have found the gem of the Old City.

We stroll in pleasant admiration. How to get tulips to bloom now? Mums everywhere, orchids, coleus, petunias; all flowers that bloom at specific seasons, but happily commingling now. We are enjoying the orchestrated blooming. And wonder about the upcoming (?) parade. As we amble out the gate, I’m pulled by a whiff of chicken bubbling in a vat filled to the brim with oil. I almost scald myself with anticipation. My face is greasy, my mouth ecstatic as I’m devouring succulent fried chicken for breakfast. I feel almost as guilty as if I’m drinking a Bloody Mary at 9 a.m.

So where is the parade? We think we have prime curb seats. We hear some booming in the distance, the road has been emptied of vehicles. People are drifting about, selfie sticks in hand. Pleasant memories of our countless years being at the Macy’s Thanksgiving Day parade in NYC proliferate my thoughts. But here we don’t know when or where and it seems no one does. No pushy crowds to indicate best viewing. We hear megaphone bursts of Thai every so often and figure locals know exactly what’s happening.

The float stops, people rush in for selfies and the princesses check email

It is so unlike any parade behavior with which I am familiar. No police barricades or crowd control, people drift in front of floats taking pictures close up and actually join the performers (while walking) for pictures. We saw an 8′ selfie stick and was stunned how ludicrous this epidemic has become. I remind myself that I am in Thailand and love how informal the procession is and that live flowers decorate the floats. We didn’t realize that this event takes hours; there are marching bands from schools, ethnic displays representing all regional peoples, some commercial floats, a zillion princess floats, rickshaws transporting divas of another era and politicos. We had to laugh at some musical choices: 2 high school bands played “I will follow Him” with Thai lyrics. Leslie Gore would either be laughing, feeling proud her song is globally popular or retching. Some of the floats had music, i.e., small trucks carrying a huge bank of amplifiers strapped together blasting regional or bad disco (couldn’t tell the sound was so distorted). It was a classy, tacky, professional, home grown and colorful affair. Glad we found it. 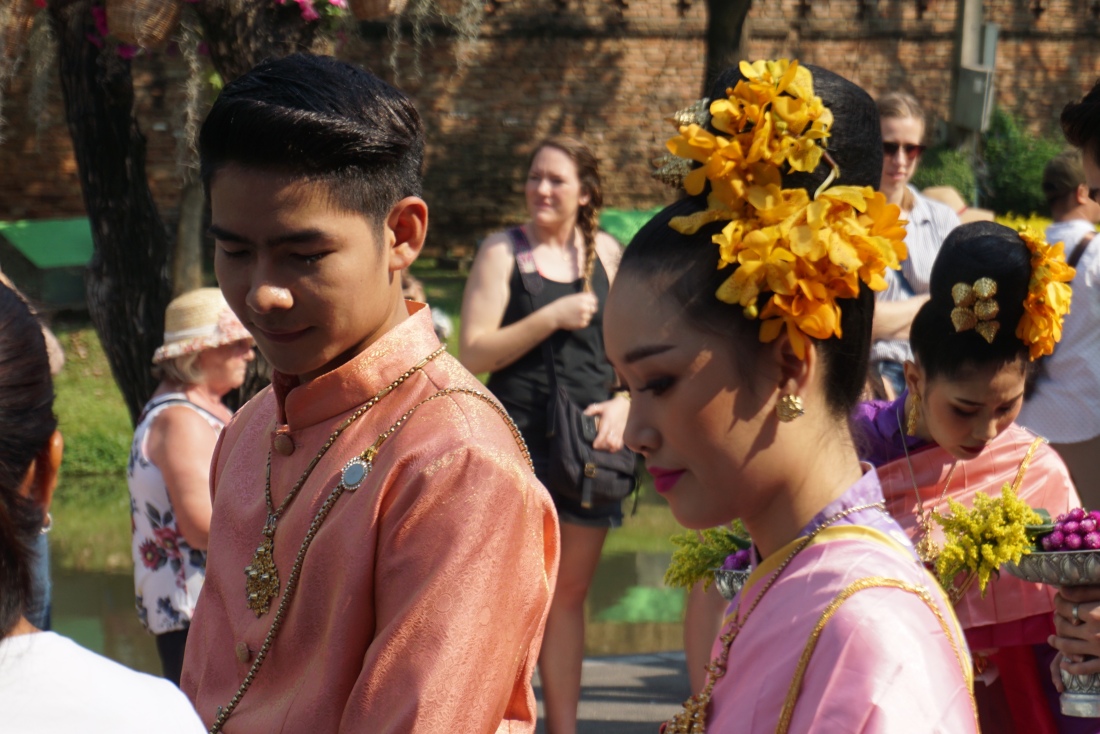 View all posts by marianfe

One thought on “Chiang Mai,Thailand – The Parade goes on…and on”